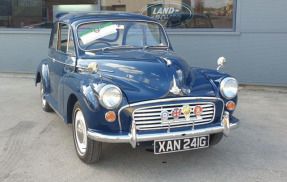 Mathewsons sale last weekend generate plenty of strong results showing once again that demand in the classic car market remains as strong as ever. The biggest surprise has to be the £19,140 paid for a Ford Cortina MK5 2.0S. This is a very rare variant of the MK5 cars, but even so for someone to pay nearly £20k for it shows that the later cars are playing catch up to the early models. A nice 1973 Rover P6 3500S generated just over £13,000 which is good money for one of these. A 1996 Ford Escort RS Cosworth made close to a record at £79,775. Our data suggests the Riley RM cars are enjoying a burst of price inflation at the moment with several strong sale prices in recent months. This included a RME, which is the underpowered 1500 variant and against its estimate of £8,700 plus, it made £15,587.Commericals continue to be in vogue and someone paid £16,125 for an Austin A55 van. The Renault Caravelle is a relatively rare car, but they rarely make strong strong money. The South African import in this sale defied that and made a record £17,415. Morris Minors are another area of the market that are beginning to command very strong money for top cars. We are now seeing top examples of saloons making close to the £10k mark and another in this sale did just that achieving £9,625. A 1952 split screen also did well making just over £8k. Another good fast Ford result was the £20,000 paid for a 1980 Ford XR3. One cheap car in the sale was a 1935 BSA Scout which made just £10,481, some way off the £15k to £20k which they normally make.Sunbeam Rapiers are continuing their upward rise. A 1961 car that looked fabulous made a record £19,833. We might soon be talking about fast Vauxhalls! Another record was £20,425 paid for a 1984 Vauxhall Astra GTE, the estimate was £16,000 to £18,000 which in itself would have been a record. This was a very nice MK1 car.